Chinese is good but CCP isn’t 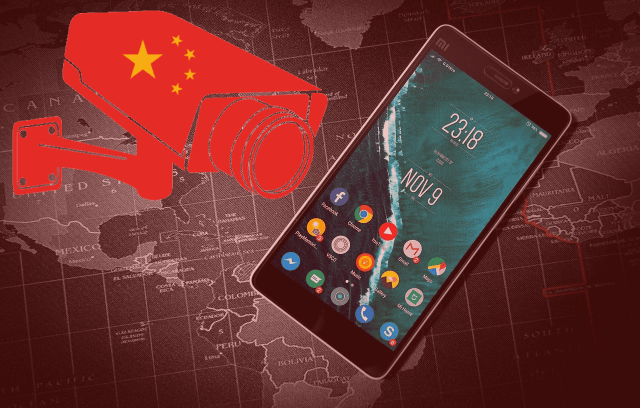 Today anti-China sentiments are growing all over the world.

Because of Chinese Communist Party’s (CCP) mishandling of coronavirus pandemic and taking unfair advantage of this situation.

Campaigns for boycotting Chinese products are gaining momentum in parts of world such as US, India, and Europe.

This has caught my attention towards the scenario around Chinese apps and services.

I want to make one thing clear, I am not against Chinese people and so software developers.

Chinese apps such as ES File Explorer could have been really awesome.

So this may be same with other apps or some services which are based in China. The developers may be great. I don’t want to criticize their hard work.

But the real problem lies with Chinese Communist Party(CCP).

Misuse of our personal data can be seen all over the globe. Google loves to harvest your data, so does Facebook.

But China is under authoritarian rule, and the CCP doesn’t just cares about individual’s privacy. 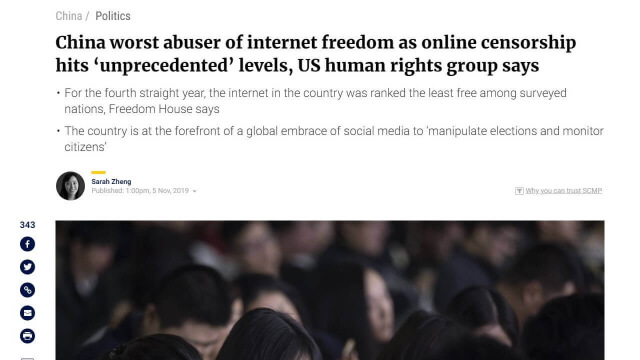 This article is not against Chinese Communism or their politics, but I want to focus on how the country handles digital privacy of users.

And China may use their country’s companies influence with malicious intent.

To spy on users worldwide, censor information that is critical of their rule, cyber espionage, and lot more.

So it is obvious that Chinese apps have potential to be used as spyware or for other malicious intent.

What are the solutions

This article is not to direct you to hit the Google Play Store, and give bad reviews for apps and bring them down.

That simply won’t solve the problem.

There is no point of installing a Chinese app, giving over your data and then giving the app a bad rating.

We have to understand our rights and go after things which will make us less reliant or not reliant at all on Chinese software.

There are two steps I suggest you to follow:

Taking control over your data

Now if you want to replace those apps and services, you need to make sure that your data gets deleted from the company’s services.

Before that, make sure you cancel subscriptions for the app service, otherwise you will be charged even after uninstalling the app

Simply hunt for account deletion in the app or website in the app’s settings or similar place.

If you cannot find account deletion page, as there may be a chance that the option may be hidden from direct reach.

The steps to delete account for a service may vary. Some companies will give direct option, others may require you to contact the developers via email.

Even if all those steps do not yield way to delete result simply search for “how to delete {account you want to delete} account”.

If by misfortune, you don’t find an option to delete account data, then you have the option to stop further data collection by the app or service, just by uninstalling the app and not using it in future.

Now this is a tricky step. You need to be smart. It’s not easy as moving fruits from one basket to another.

And based on other factors your mileage may vary.

The people around you may also affect your decision to replace a Chinese app.

If people are using a popular Chinese service, such as WeChat, then to interact with them, you will have to either give up replacing the app or convince people around you to switch to privacy-friendly alternatives.

My focus to replacement apps will be mostly open-source apps and apps that respect your privacy.

You may be used to apps that came installed with your phone. For example, Google Photos or QuickPic. But these apps also send your data often without your consent.

I recommend you to use apps by Simple Mobile Tools, which offer simple user experience with no additional permissions apart from what’s required for functioning.

Recently, browsers from Xiaomi such as Mi browser were caught red handed sending your incognito browsing data to Xiaomi servers.

The story is similar for other Chinese browsers such as UC Browser, which is popular in Asian countries such as India.

So alternatives to those shady browsers I recommend are Brave browser and Bromite. 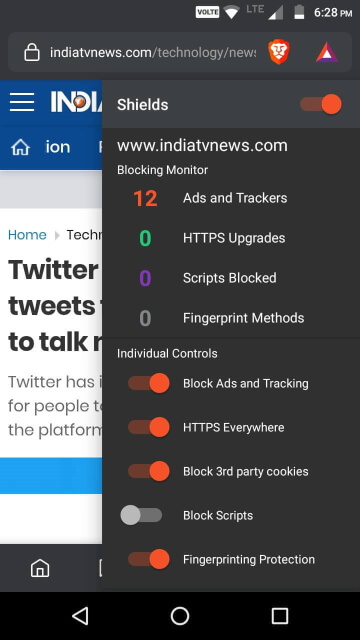 Both are open source and have committed to protect user’s privacy.

Brave browser is easy to install from Google Play Store, whereas Bromite requires manual install from their website or f-droid.

One benefit is these browsers provide ad blocking and blocks trackers online which makes you immune to tracing by websites.

Another player is Firefox which also blocks tracking, but there are some security concerns related to it’s engine Gecko.

3. VPN app to use: ProtonVPN

Using VPN is cool, it just hides your IP address and protects your browsing, by routing your internet traffic to VPN servers.

But what if VPN servers are themselves collecting your browsing data for their purposes. Then it is worse than not using VPN.

VPN services in China or by Chinese companies pose a significant security threat, as data privacy isn’t a thing there.

So you better look for a VPN which have servers in European Union or United States, because laws regarding data protection makes companies more responsible in handling user data.

Not just region, look for how the VPN company handles your data. Do they keep logs of your browsing? How good is their encryption? Etc.

Here I recommend ProtonVPN. Not only the app is secure with servers in Switzerland and Iceland, but also has a free-tier. And best of all, the apps are open source. 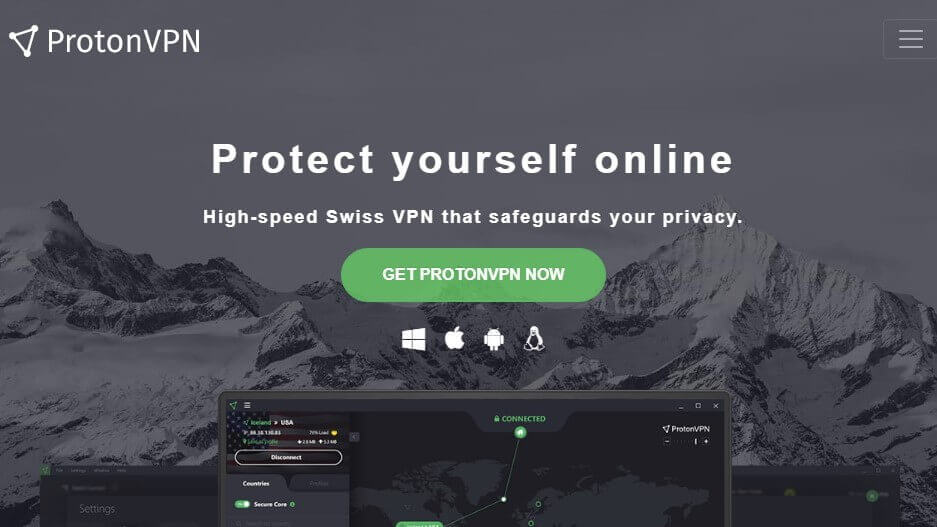 Another good alternative I can recommend is Tunnelbear VPN.

Camscanner is another popular app with more than 100 million downloads by a Chinese company, CC Intelligence Corporation.

Recently, the app came under fire and was temporarily removed from Google Play Store, after it was found with advertising malware. 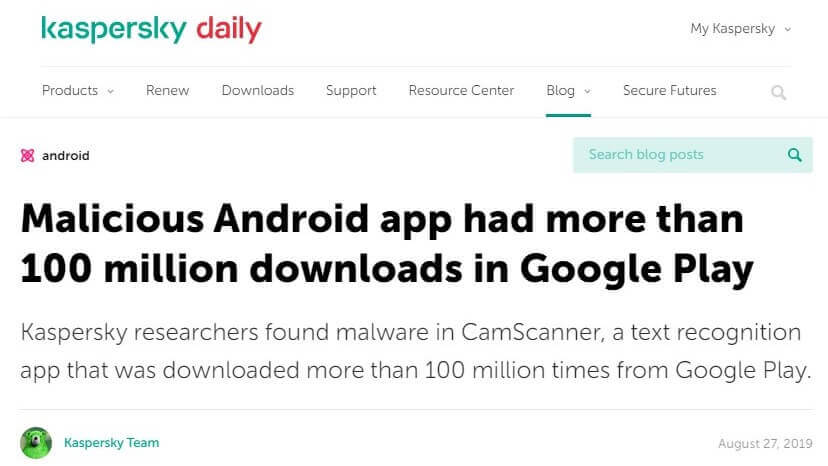 My recommendations for a document scanning apps are Office Lens by Microsoft and ScanPro by Scanbot.

ScanPro is a good alternative to Camscanner and they take privacy seriously with their Play Store description mentioning:

ScanPro values your privacy. We will never store or save your documents, or use them for any purpose. All document related activity happens on your device, or with the cloud backup provider you choose.

For Office Lens, it depends on how much you trust Microsoft with your data. But it’s still better than trusting a Chinese company.

WeChat is not much popular outside China. Still, if you have friends from China, you may be used to communicating over WeChat. 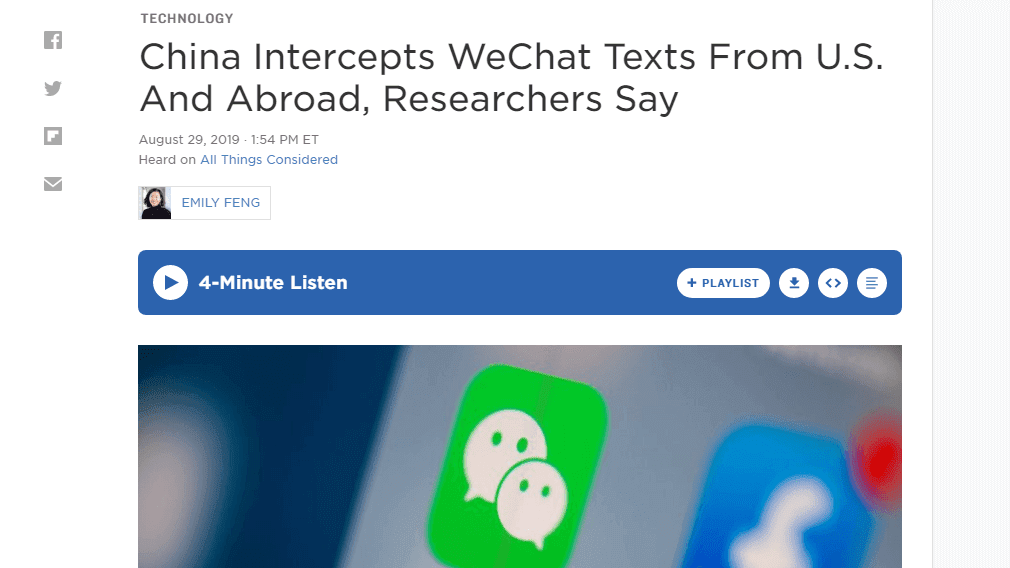 The app is so dangerous that it can land you in trouble. Because it is heavily monitored by Chinese government authorities even for users outside China.

There were reports that even Chinese Americans who were in US and doing things that are not illegal in US, such as making memes on Xi Jinping, but criminalized in China were arrested when they went back to China.

And WeChat had a role in that many times.

So you need to make sure that Chinese Communist Party not spying on you.

So Telegram and Signal Messenger are good privacy friendly alternatives.

Telegram is used by pro-democracy campaigners in Hong Kong to keep their communications away from prying Chinese authorities.

Also, if you are in China or want to chat with someone in China, you need a reliable VPN to access Telegram as it is banned in China.

Signal Messenger though is reported to be working in China.

Share.it and other file sharing platforms from China are widely popular to share files. These apps used to be simple file sharing apps, but today they are flooded with adware and video content.

The following screenshot shows how share.it is abusing it’s popularity to show ads and content that has nothing to do with a simple task as file sharing.

So you need to move on.

For that I recommend two alternatives to Share.it - Snapdrop and TrebleShot.

The first, is a Progressive Web App(PWA), which means you and your friend with whom you want to share files just have to open the website in browser, and you are ready to go. It’s that simple.

Snapdrop also works on any device that has got a web browser.

TrebleShot, a open-source app available on Google Play, does what a file sharing app is supposed to do. No ads, just file sharing. 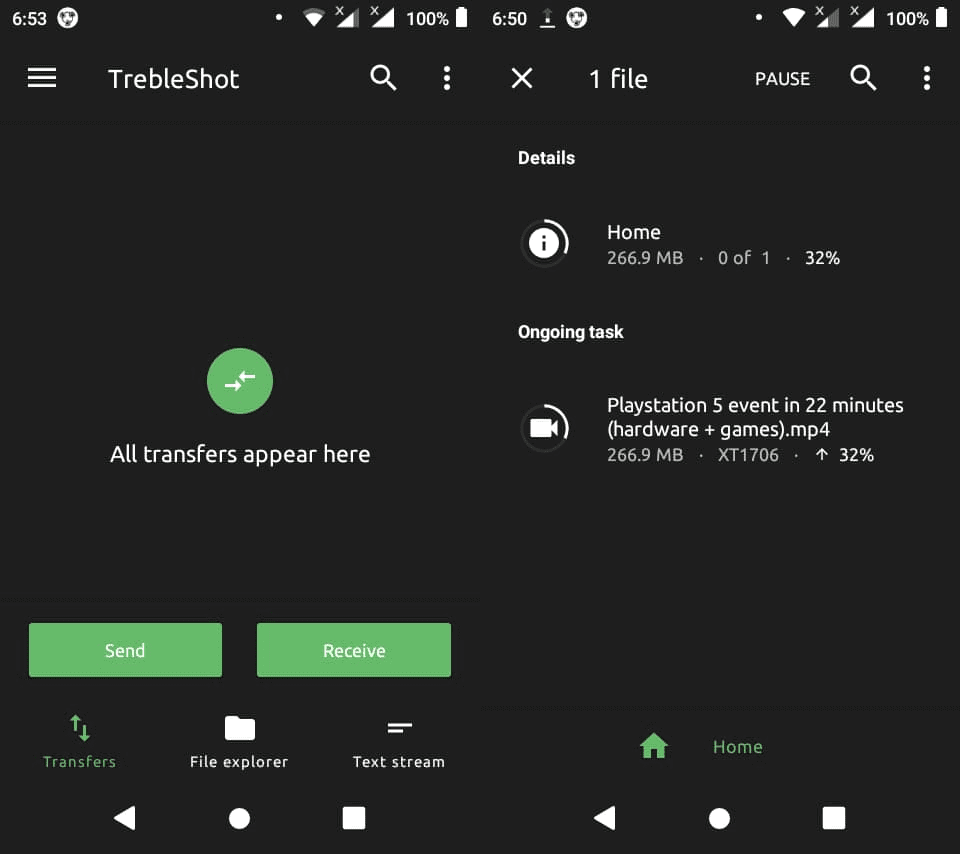 Zoom isn’t a Chinese app, nor based in China. But the app has complied with orders from Chinese authorities.

And it censors for China because they want to operate in the lucrative Chinese market.

Plus, they have servers in China, which gives Chinese Communist Party all access to data in those servers. And it should worry people from other countries too. 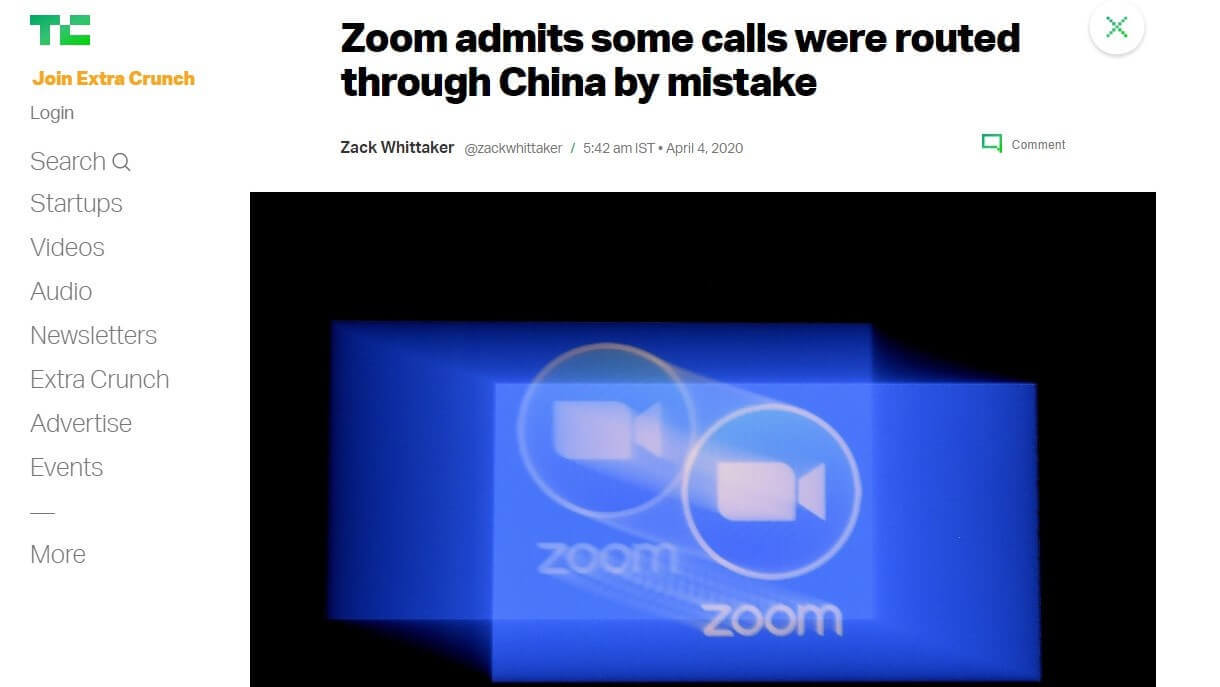 Recently they removed account of a activist Zhou Fengsuo. who commemorated Tiananmen Square Massacre of 1989 on Zoom meeting. And even though the activists were using paid accounts which has encryption. 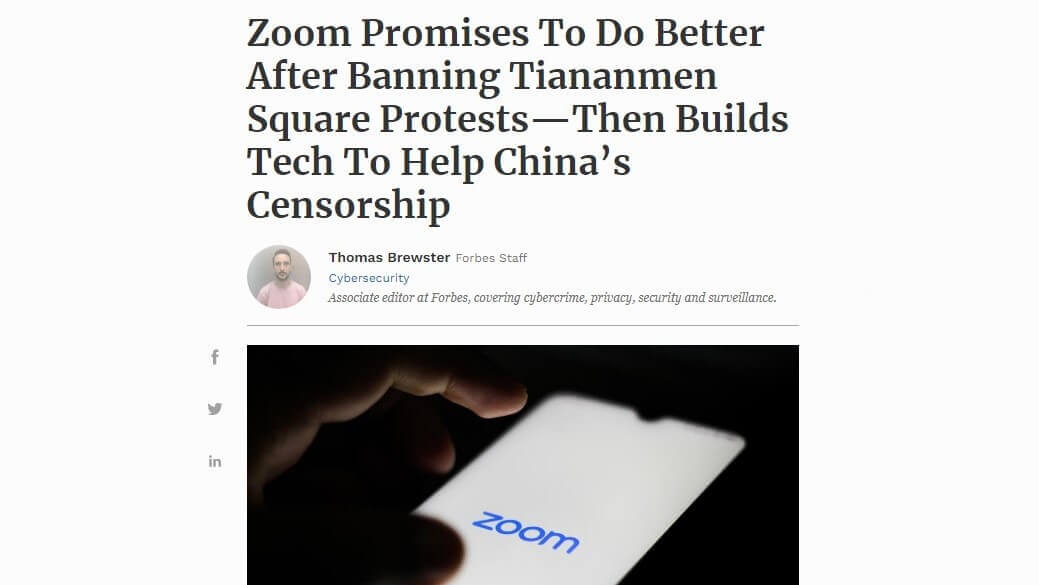 This was to comply with local law inside China, which bans discussions of 31 years old incident.

This shows how Zoom and some other companies based in West are in CCP pockets.

Signal is the best alternative to Zoom as the app has end to end encryption for all users and it is loved by security community.

Microsoft Teams is a good choice for Office 365 users and it “enforces team-wide and organization-wide two-factor authentication, single sign-on through Active Directory, and encryption of data in transit and at rest,” according to Microsoft.

For Apple devices’ users, FaceTime is a good option as it also uses end-to-end encryption and even Apple does not have key to view your conversations.

Want to lock your installed apps and keep them away from prying eyes around you. Sure, install an App locker.

You may have heard of a popular app called AppLock by DoMobile for that. It’s a Chinese company.

The permissions this Chinese app requests shows its intention of going beyond locking apps and has serious potential of being a spyware.

As an alternative to this app, I recommend you Norton App Lock. Not only the app is free, but does not require any extra permissions apart from permissions required for the app to function.

If Chinese apps came pre-installed on your phone as system apps, you can use Android Debug Bridge to uninstall those Chinese apps.

Here is a comprehensive tutorial video for this purpose by XDA.

You can go even further, by installing a custom ROM that does not have Chinese apps. Some custom ROMS give better privacy controls.

Indian Intelligence agencies have red-flagged use of 52 mobile apps with Chinese links. Here is the complete list. I suggest you to uninstall these apps, and look for alternatives.

While I have mentioned some Chinese apps and services and their privacy-friendly replacements, I cannot mention each and every Chinese app.

There are plethora of Chinese spyware apps on Play Store, and this list of replacements could go on.

If you are suspicious of any app being a Chinese spyware, you can search for the app country of origin. Or if the apps have any links to CCP.

It just takes few minutes of research. Your decision not to use Chinese apps that are malicious, can help protect your privacy.